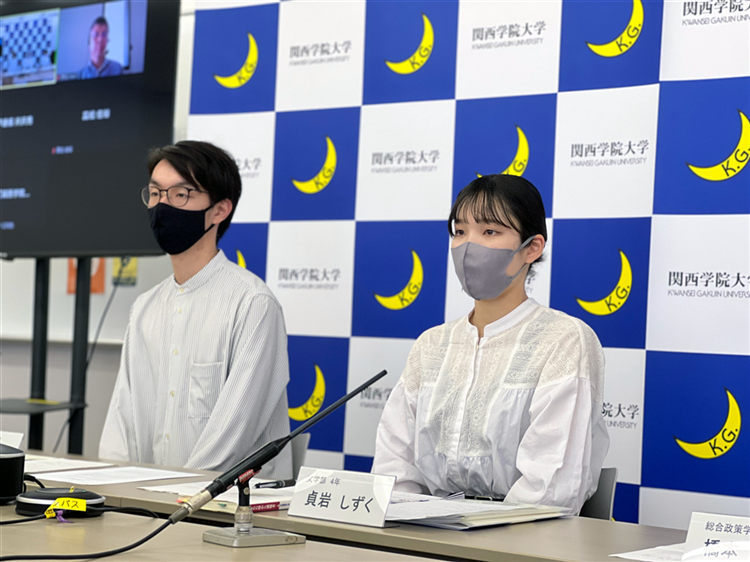 A group of 45 students from nine universities, mainly from Kwansei Gakuin University (KGU), have translated experience journals written by in-utero hibakusha (atomic bomb survivors), people who were exposed to radiation in their mother’s wombs when the atomic bombs were dropped on Hiroshima and Nagasaki. The journals tell the stories of their lives at the time and thereafter. The students, from a generation that has never known war, read the journals deeply and tackled the work of translating them as they agonized over how to translate phrases such as “like hell” and “spots of death,” as well as the nuances of the journals. In late June, they will be presenting the translated journals to the world in e-book format. Amidst the conversation about the use of nuclear weapons due to Russia's invasion of Ukraine, the students are eager to tell the world that the tragedy brought about 77 years ago by nuclear weapons is not over yet, and that there are still people who are suffering.

On April 25, KGU held a press briefing at the Kwansei Gakuin University Osaka Umeda Campus (Kita-ku, Osaka) on April 25 (Monday), simultaneously broadcast via Zoom, to give three KGU students (Shizuku Sadaiwa, 4th-year student in the School of Humanities, and Kazuki Ikeura and Mirea Hashimoto, both 4th-year students in the School of Policy Studies)  an opportunity to speak to the press and explain the course of events that led to the translation project. The experience journals that were translated by the students—contributed by 47 people in total—were collected by the national In-Utero Hibakusha Liaison Group (representative: Kazuhiko Futagawa, office: Hiroshima City) and published in July 2020 as “Hibakusha from birth - thoughts of in-utero hibakusha, entrusted to the next generation" (B5, 244 pages). The collection is a sequel to "Thoughts on the 70th anniversary of the atomic bombing - Experiences of in-utero hibakusha and others," a collection which was published in 2015, the 70th anniversary of the bombing. The first collection has already been translated.

The students who played a central role in translating the journals took the “Social Inquiry Practicum” course offered by the Center for Hands-on Learning Programs, and considered and learned about the concept of peace in the course of their fieldwork at the island of Etajima, Kure (Hiroshima Prefecture) in 2020. While listening to an in-utero hibakusha during a practical training session, they learned that the second collection had not yet been translated, and wondered if there was anything that they could do to help. Through friends and acquaintances, they recruited students at other universities to form a translation group. Approximately 50 students—from schools such as International Christian University, Hokkaido University, Ryukyu University, and Shiga University—came together to work on the project. Beginning last August, they began translating the journals in pairs. They held monthly online meetings to communicate with each other, and by December, the work was almost complete. The compilation is currently in the final check stage, and it will be made available to the public as an e-book in June. Ms. Sadaiwa, a central member of the translation group, is from Hiroshima. “I knew of the second- and third-generation hibakusha, but I had never heard of hibakusha who were exposed to the bomb while in utero,” she said. “I hope we can convey the fact that there are people who have suffered for a long time because of something that humans created.”

"What Do Food and Sustainability Mean to Generation Z?" Discussion Group Meeting Held at KGU

International Volunteers Share Their Overseas Experiences at an Open Forum